You are here: Home » Being Part of the Pink Honor Roll

Being Part of the Pink Honor Roll

It was a small, modest reception tonight (Tuesday, Feb. 23) in Papillion, Neb. Not a lot of people. Mostly women.  A few men. A variety of ages.  People were asked to dress casual. Nothing fancy, nothing formal. A few people wore pink shirts, or other articles of clothing with a flash of pink. We wore sticker name tags.

There were a few hors d’oeuvres, a few stand-up tables for people to place their small plastic plates and bottled drinks or plastic glasses on. There was a splash of pink here and there.

On Oct. 8, 2017, thousands of people had walked or ran in the 2017 Susan G. Komen Race for the Cure in Omaha. Hundreds were cancer survivors. All did it to increase education and funds for breast cancer. Money raised goes towards research about breast cancer, but also for a helpline, grants to help people get the tests and treatments they need, programs to help cancer survivors, etc.

I remember how loud, busy, exciting, and even emotionally overwhelming that big event was, especially when each of us probably has at times in our lives felt very alone and private and overwhelmed as an individual as we dealt with cancer ourselves or in our loved ones.

It was the same with the people that attended the event tonight.

Tonight, our small group of people was honored for each raising more than $1,000 last year in the Nebraska race.

I thought about how fortunate I was to be there with someone I now consider a dear friend, and how I still am humbled to be there. 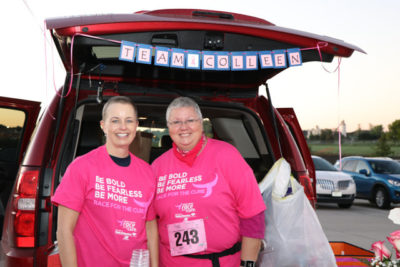 Elaine Shein (on right) with Colleen Johnson (left) at the 2017 Race for the Cure. Both women raised enough funds to be on the 2018 Pink Honor Roll. Colleen also was one of the speakers during race day that shared her experiences about breast cancer.

My friend Colleen Johnson had encouraged me to take part in this race several months ago. While I had signed up for the race, I stayed quiet about it for a long time, telling no one and not actively seeking donations.

I think it was a Tuesday night I finally revealed on Facebook to my friends, and a few relatives, that I had signed up for the race that was going to take place on a Sunday morning, just a few days away. For many of those people who read the news on Facebook, that was also the first time they found out I had been dealing with breast cancer the prior few months.

I didn’t even create my own team for the race; instead, I joined the team of my friend, Colleen — our friendship developed out of both of us fighting cancer at the same time and attending a “Look Good, Feel Better” course together, sponsored by the American Cancer Society. During that course, she inspired me, she made me laugh, she coaxed me to try on wigs I never would have dared to do alone. I figured that was enough to make us friends for life.

I had set a modest goal of raising $100 in the Race for the Cure, since I figured it was really not much time and I knew I didn’t have the time to do serious fundraising. I also have a tough time asking people for money. Fundraising doesn’t come naturally to me in life.

I was stunned as people I knew donated to the cause. I was very touched and deeply thankful to the people who made donations, big and small, from more than one country — people I got to know from different times and places in my life. I see their donations as the gift that keeps on giving; whether it’ll be affecting me or total strangers, so many of us will benefit from the money that came in. All the money raised in Nebraska stays in Nebraska. I already know of a few programs that have helped me from the funds from this race, including one that I will start in early February (A Time to Heal).

In the end, I raised $1,600. Both Colleen Johnson and I hit that mark or over. We became part of the 2018 Pink Honor Roll for fundraising more than $1,000. There are 31 of us altogether on the Roll from two states; we were involved in races in Sioux Falls, South Dakota and Omaha, Nebraska. We collectively raised more than $81,000.

I recognized some of the women there tonight. One woman especially stood out: I recall how, during the race in October with thousands of people there and almost everyone wearing pink, she had come up to me and said I looked familiar. She thought she knew me, and was trying to figure out how. We had walked a bit together that day, but concluded that we didn’t know each other.

When I saw her tonight, I smiled and said, “I met you at the race.”

She paused, took a close look at me, and smiled. She remembered me — and laughed, commenting how she recalled that she thought she knew me, but didn’t know me.

“But we know each other now!” she declared, triumphantly.

Talking to some of the people there tonight, I heard people talk about their original diagnosis, about friends and family who are cancer survivors — or had passed away from cancer. When some talked quietly about the loved ones they lost, or some of the tough battles they themselves had gone through — surgeries, treatments, etc. — I could understand their determination and drive to do all they can to raise money. It’s not for the glory, the recognition, or the adrenaline rush. They talked about current research, about clinical trials looking for volunteers, about advancements in technology and genetics testing.

These people earned their spot there tonight while probably hoping some day we never would have to meet there again because cancer would be eliminated.

As I stood there, I thought about how much cancer touched all our lives, as well as our families and other people we know.

At that moment, I realized we were all there because we were racing to save lives — the people we loved, as well as ourselves, and the generations to come — and we showed how even a few handfuls of people can hopefully make a big difference.

Especially when we have people who believe in us and support us along the way, even one step at a time.

“To accomplish great things, we must not only act, but also dream; not only plan, but also believe.” — Anatole France