Kasey and Emily couldn’t have imagined they’d be where they are today when they sat down to talk about the first annual event in Minden, Nebraska—a community of just under 3,000 people.  Since then, Kasey and Emily brought on another friend, Mandy, to help coordinate the annual fundraising event at Auto Way Bowl that have grown to include open and tournament bowling, raffles, silent auction, t-shirt sales and more.  The women are overwhelmed by the community support. Kasey notes they gather feedback from people each year, and “we try to make it bigger and better each year.”

Local businesses and individuals support the event by donating items for the raffles and silent auction and many living in surrounding communities drive to Minden to participate each year. Emily’s daughter, Miss Christmas City, made a special appearance and helped promote this year’s event. Despite blizzard conditions and extremely cold temperatures, this year’s event raised more than $7,000.  Half of all proceeds were donated to Komen Great Plains to help vulnerable women with breast health education, screening and support.

Pictured below (L to R) Emily and her mother, Emily’s daughter, supporters showing off custom t-shirts made over the years. 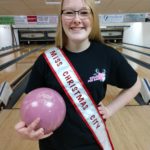 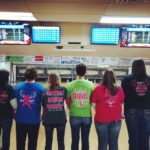